Is this thing on ?

Ahem. Yes. Hi, im Esper, the Artist Formerly Known As Zero. It’s been awhile. As in, literal years. With a S at the end. To say many things have happened would be an understatement, in fact im not totally sure where to start.

My depression started flaring again, and my godmother passing away at the start of 2016 was the last nail in that proverbial coffin – now having lost all the extended family I was close to, I spiraled but thankfully was able to puil though and catch myself in time to consult. Im medicated for anxiety again now, with the usual mixed feelings that come with it. Which is odd – I’ve never judged anyone else for having to be medicated for whatever reason, so why am I so hard on myself for the very same thing ? Then again, not the first time my brain’s had a hangup on a thing, and no the last.

The biggest thing, and the thing that is affecting me the most at the moment, however, is the fact that I was formally diagnosed with Keratoconus after being bullshitted about it for the last few years. That’s a whole entire topic that probably deserves a post on its own, and would probably need to be marked as not safe for work and require it’s own disclaimer, because holy cow that was a crock of dungaholie. The short of it is that I’ve been sitting on a diagnosis and nothing else for a month and an half, was told to wait for the specialist to contact me, was given no name and no phone number to contact myself, basically only told the name of my condition and told to get the fuck out. I was left to do most of the research myself.

The good news, if there is any, is that I can’t go blind from this. The bad news is, depending on the severity on my case (I have two very polarizing opinions, one from my optician whom I will probably not return to, saying it was minor and any intervention was preventive, to the asshole specialist who pretty much is YOUR CASE IS VERY ADVANCED WHAT THE FUCK WERE YOU WAITING FOR TO CONSULT (the referal from #A, asshat)) a cornea implant might be the only thing that can be done to fix the problem. Which scares the shit out of me, but the idea of staying like this and actually GETTING WORSE for the rest of my life scares me more, so in the word of my space mama Carrie Fisher : “Be scared, but do it anyway.” It’s a bridge I’ll cross when I get there. Im extremely light sensitive since my vision is near perfect at night beside an haloing effect around light sources, and I seem to have dodged a lot of the more annoying bullshit, but the light sensitivity sucks ass. It sucks hardcore donkey butts. 0/10 do not recommend.

Not all of it is bad, though. I’ve been with my very lovely gitlfriend, aka the most patient woman in the entire fucking universe, for nearly a year now. It is thanks to her, in fact, that this blog now exists, and I was able to migrate off blogger. Which i’ve always wanted to dropkick out the window in general. There’s still a few glitches in older posts, but everything from this post on will be on this blog. 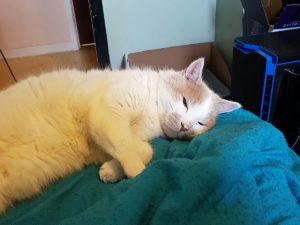 15 years young, still going strong, my ever constant and loving assistant in all things, and companion of half my time on this hunk of rock <3 We’re ready to rock. Slowly and blindly, perhaps, but… its better than nothing, right ?

One Response to /tap microphone