“Walking with a friend in the dark is better than walking alone in the light.” – Helen keller

HELLO YES I AM HERE ! And welcome to the reveal for the 9th bead soup blog party ! Fancy, fancy. I can’t wait to see what everyone else made ! But that’s not what you came here for, now was it ? Well, this did go better than I expected, to be honest, which was terrinbly relieving for me. I can still do this = even if it was a much slower process than I am used to. finding tiny tiny little holes on beads could get challenging, and I had such a headache when I was done… But I was happy, too. Because you know what ? That’s one thing less my stupid eye disease stole away from me. And that’s that.

Secondly, I would like to apologize for the somewhat subpar photos. I was hoping to be able to go take shots outside, but (as many of you probably know !) the east coast of north america got snowed the hell in this week, (I am writing this on March 19) and I was no exception ! Whelp. The best laid plans of mice and men, indeed.

But I do in fact have a thing ! One thing. Which feels strange, likely, since i usually do multiple pieces per soup, but this was a much smaller affair, and I wanted to work things out into one pieces. So there we go, and there she is ! 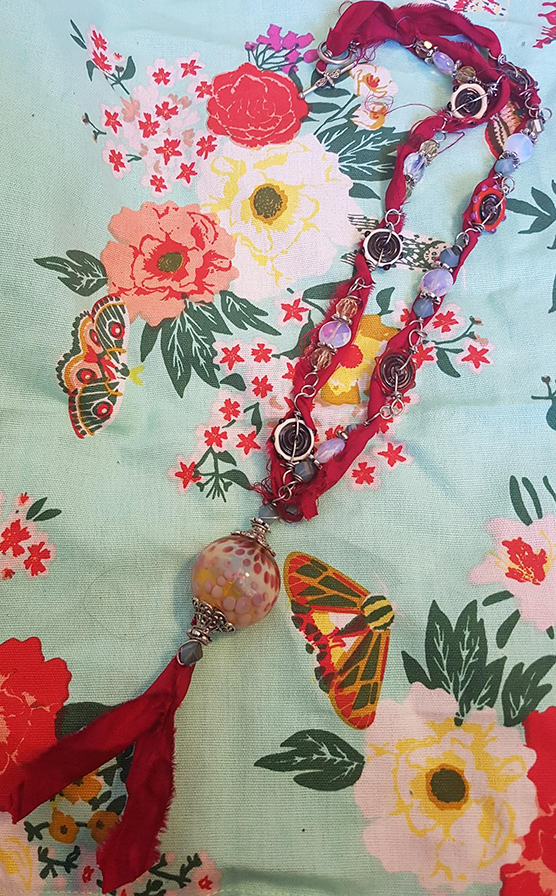 Badabing, badaboom. I had the clear image of a necklace the moment I saw the focal, and a rough idea of what I wanted to do with it. Most of the components in this pieces, beside the clasp and the ribbob,, came from either the soup or the dessert package Lori sent me. I wanted to stick closely to both the official and unofficial soup since there were so many lovely things in there, all matching the focal so well. I have to say that beside the focal itself, my favorite beads were definitively the Pacific Opal Satin Helix. Im so sad it’s discontoinued now 🙁 I want to hoard too ! Hahaha. 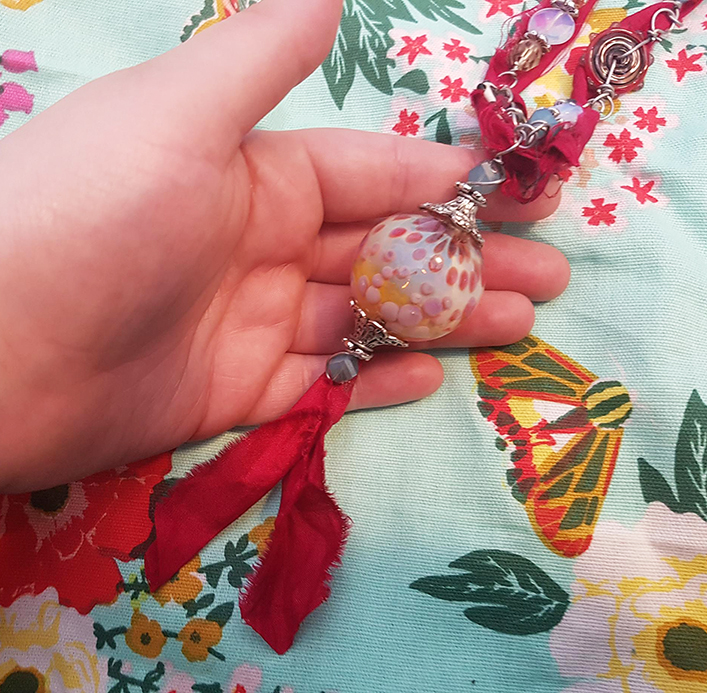 I used parawire for all the wirework in this piece. I find that I love it a lot more than artistic wire – it seems to kink less easily, as well as being avaliable in antique tones and color. This one is Brushed Silver, and im happy with the matching, but it doesn’t seem to be made in 18 gauge, which is what I usually use for jump rings, so ill probably try titanium next. The focal piece came together very easily, using the bead caps Lori sent me. I made all my loops bigger than I usually make them because I knew I was going to wan to thread something though for stability (I don’t trust 20g jump rings… I just don’t, lol) and threading ribbon though teeny teeny loops is a pain in the ass on a good day. 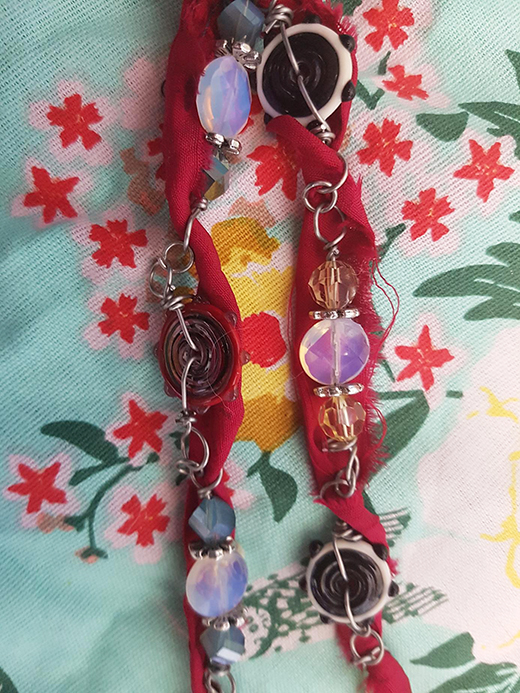 The links I worked on in my usual manner – I made each link first, then strung them all together to make a chain. I still wanted something a little bulkier than a simple chain without stealing the focal too much, while making sure I had something to keep things together if my jump rings decided to fail on me, sp I threaded ribbon though the chain and glued the beads on top to keep everything stable. I planned to use white ribbon at first, nut I couldn’t find any… I think i sent my last to Lori, whoops. There wasn’t really time to order any, so I used leftover red ribbon instead – and to be honest I think it works better than the whire would habe, especially since there are red in many of the beads, but very little white in the piece.

Well, that’s all she wrote ! Be sure to check what my lovely partner Lori Anderson made with the beads I sent her, as well as what everyone else made ! Have fun and stay crafty !