Art of Awareness Blog Hop :: Never Give Up, Never Surrender

“Never give up. Not your life. Never surrender. You are stronger than you know, stronger than you might ever believe that you are. you have weathered so many storms already, and you will weather many more. No matter how dark things get, how hopeless, remember that there will always be someone who loves you. Maybe it is selfish of me to say this, but nothing will kill me more than having to do what she did today.”
And that was what I did. Even after she was gone, I still did exactly just that. Things arn’t always good, and sometimes there are dark storms rocking my life. Some days I feel the old depression monster gnawing at me again. But I hit him with a baseball bat. make sure he’s down for a little while, and carry on.
I promised not to give up, after all.
The bracelet itself came to me very quickly – the moment I got my bead in the mail, I knew which basic design I wanted to go with. I wanted a price I could see, something I could use as a reminder when things get hard. As you might notice, it is asymentrical – the bead sits toward me on my wrist, closed to my eyes, closer to my heart. I broke apart the bigger links from a commercial chain and used jump rings to make a new chain. It was really hard to do that, actually – the metal wasn’t very pliable and none of my pliers could quite cut it. I pondered changing my design, but the bead sat here, reminding me. You can’t give up, remember ? So I found a way. And I did what I wanted. This was my first test drive of a new wire, and I gotta say I quite love it and need more of it. It comes in antique tones, which was one thing that kind of annoyed me with my work – I use mostly antiqued findings, but was stuck with bright wire.
This piece was supposed to be much more complex initially, but any attempt to add more to it didn’t take – didn’t feel right at all. Eventually I decided to stop fighting the piece and just leave it as you see above.
The cause I am supporting is, as you might have guessed – depression and auicide awareness. No one should have to think death is the only way out, and yet too often it is the case. I thought exactly that for a long time, but I want you – all of you who read this – to remember : no matter how dark the storm is, you can weather it. If you need help to weather it, seek it – it is not shameful or weak, like too many seem to believe.
You are beautiful. You are loved. You are a star.
Never give up.
Well, this actually was the hardest part of the process, and kudos for making your way though that rather impressive wall of text. Please go see all the other pieces in the art of awareness blog hop, and as a thank you for getting to here and to hopefully put a smite back on your face after this pretty heavy matter, have some Feline Assistance In Photography : 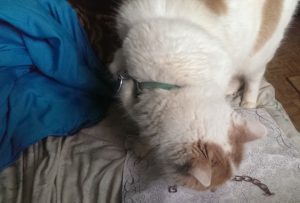 0 Responses to Art of Awareness Blog Hop :: Never Give Up, Never Surrender